(New City, New York) – Clarkstown Supervisor George Hoehmann, met with Ramapo Supervisor Michael Specht to celebrate the completion of the construction of a new cul-de-sac that has been installed on Samuel Road in Nanuet at the border of the Town of Clarkstown and the Town of Ramapo.

The cul-de-sac, which has been landscaped with trees, shrubbery and a walkway, replaces a “Jersey barrier” that was originally installed by the Town of Clarkstown back in 2012 in response to complaints of speeding along a popular short-cut through a quiet Nanuet neighborhood.

When the “Jersey barrier” was initially installed, speeding and commercial traffic on Newport Drive was reduced dramatically. However, some residents of the Town of Ramapo felt that the placement of an ugly barrier across the road was unwarranted and an action was commenced by the Town of Ramapo in the Federal Court to have the barrier removed.

Earlier this year, while the case was pending, Supervisor Hoehmann and Supervisor Specht came to an agreement to end the lawsuit by replacing the barrier with the landscaped cul-de-sac, which is aesthetically pleasing, preserves traffic safety, and enhances the character of the neighborhoods in both Towns.

“I am delighted that we came to an agreement to end the lawsuit and construct a beautiful area that will preserve and protect the neighborhood from traffic in accord with the concerns of our residents,” said Clarkstown Supervisor George Hoehmann.

“This newly constructed space will enhance the quality of life for both town’s residents. I am glad that we could work together amicably to settle this issue,” said Ramapo Supervisor Michael Specht. 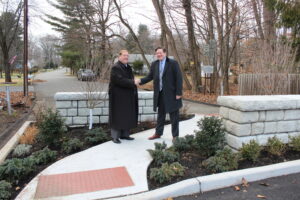