(New City, NY) – Clarkstown Supervisor George Hoehmann and members of the Town Board unveiled significant upgrades to the town’s swimming facilities at Lake Nanuet Park this weekend. A new, modern bathhouse and lifeguard area was the centerpiece of the improvements. The new bathhouse and lifeguard area replaces a structure that was over 40 years old and well beyond its useful life. The new building includes a number of features and amenities designed to enhance the experience of swimmers of all ages.

“The pool at Lake Nanuet has always been a popular destination for Clarkstown residents. The brand new bathhouse and lifeguard area is the finishing touch on a series of improvements we have made to Lake Nanuet, ensuring that wonderful summertime memories will continue to be made here for years to come,” said Supervisor Hoehmann.

In addition to the physical improvements made to the park, Supervisor Hoehmann also announced that a new concessionaire, LaSirena Seafood will be providing a number of delicious options to keep hungry park-goers satisfied. LaSirena Seafood is led by owner and Chef Kyle Rubino, whose family operates the popular Nyack Seaport eatery.

The Town of Clarkstown purchased Lake Nanuet in December of 1971 from a private swim club known as Townline Day Camp. The pool opened officially in 1972. The town upgraded the pool in 2007 by renovating the pool with a zero depth entry, a new pump house and refreshment stand. The pool also includes a number of fun aquatic features, including slides and other fountain-like structures for younger children to enjoy.

The improvements made to Lake Nanuet are just one in a series of investments the town has made to its parks and recreation system. Clarkstown recently unveiled improvements to Germonds Pool and will be opening a new playground at Kings Park, which includes new safety surfacing and outdoor adult exercise equipment. The town also looks forward to officially opening a dog park at Congers Lake Memorial Park in the fall.

Supervisor Hoehmann noted that the focus on the town’s parks was of paramount importance to him and the Recreation and Parks staff: “I am very proud of the work that we have done to maintain and improve upon Clarkstown’s excellent parks system. The residents of Clarkstown work hard and deserve places to play or leisurely stroll through with family and friends. Our stewardship of parks is a critical aspect of continuing Clarkstown’s reputation as a great place to live, work and raise a family.” 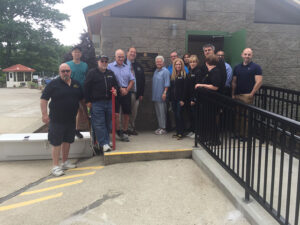